Dementia is a progressive disease. It begins with subtle changes that aren’t always noticeable. As the person advances through the 7 stages of dementia, their symptoms grow worse. Knowing what to look for early on can help family members recognize the signs. It can also help caregivers deal with the changes the person undergoes as they progress through the later stages of the disease. 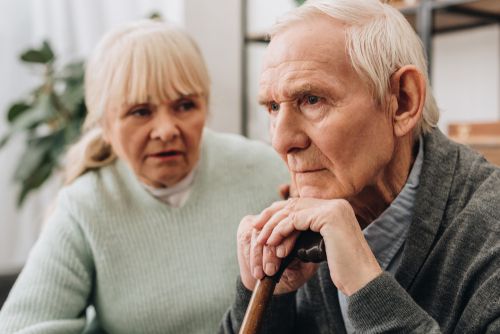 The Alzheimer’s Association defines dementia as a “decline in mental ability severe enough to interfere with daily life.” All forms of dementia involve memory loss. While Alzheimer’s disease is the most well-known manifestation of dementia, people can suffer from dementia symptoms and not have Alzheimer’s. There are other conditions that can cause dementia, which itself isn’t classed as a specific disease but rather a syndrome, or a series of symptoms.

Before a person is diagnosed with dementia, they must also have a significant impairment of two or more of the following core mental functions:

An impairment of visual perception might mean difficulty telling colors apart, detecting movement, or having hallucinations.

Once they are diagnosed, a medical professional will use guidelines to determine which stage the person is in. However, every patient doesn’t progress through the 7 stages of dementia in sequential order, nor does everyone follow a linear progression. Some people have symptoms for a short time before they vanish while for others, they worsen. The type of dementia and the manner in which it manifests in an individual affect the symptoms and the speed at which it progresses.

Dementia is caused by damage to brain cells, which results in their inability to communicate with each other. The area where the damage occurs determines which functions the disease affects. Different types of dementia are associated with brain cell damage in certain areas. In Alzheimer’s, the hippocampus, which is responsible for learning and memory, is often affected first. This is why the first symptom of Alzheimer’s is often memory loss.

The 7 Stages of Dementia Using the Global Deterioration Scale (GDS)

The GDS scale, also called the Reisberg scale, is the most common method of measuring the progression of dementia. It is most relevant for people with Alzheimer’s since it is based on the degree of memory loss. Since 60 to 80 percent of all dementia cases are Alzheimer’s patients, this makes the GDS a relevant scale for the majority of dementia patients. The GDS also identifies four distinct categories of Alzheimer’s including:

Although there are no noticeable signs of dementia present in your loved one during this stage, the changes in the brain that lead to dementia started many years ago.

For those who progress to stage 2, there is very mild cognitive decline. They begin to experience some forgetfulness, but not to the degree that it seems abnormal. They might begin misplacing things, forgetting to take medications, or forgetting appointments or other engagements. These events will likely be far enough apart to prevent loved ones or medical providers from recognizing the signs of dementia.

The third and final stage of the No Alzheimer’s category is marked by mild cognitive decline. The person might experience more episodes of forgetfulness. They might not perform normally at work, begin having problems with their speech, and have trouble focusing on simple tasks. The damage to brain cells caused by dementia can’t be repaired. But recognizing the signs of dementia at this stage allows for early diagnosis and intervention that might help ease some of the symptoms. Some medications might reduce anxiety, boost motivation, and improve concentration and memory. They don’t prevent the disease from getting worse; they only delay it temporarily. They also give the person an opportunity to live well longer and plan for the future.

Many people successfully plan their own care for dementia before their symptoms become worse. They choose where to live, the type of care they will receive, and the types of medical care and interventions they want. This prevents the need for their child or other family member to invoke a power of attorney later on. Encouraging your loved one to make their own decisions during the early stages of the disease will make things easier for both of you. It gives them time to adapt to a new lifestyle and prevents any controversy that might arise later on. At Park Terrace Senior Living, we believe every person with adequate mental capacity should have the right to choose where they want to live.

Some signs and symptoms to watch for during stage 3 include:

Stage 3 lasts between 2 years and 7 years on average.

During early-stage dementia, your loved one will experience moderate mental decline. These signs are distinct and frequent enough to detect during a medical exam. They have problems concentrating, forget recent events, and they have trouble managing their finances or traveling to unfamiliar places. Sometimes people in stage 4 dementia begin to withdraw, preferring to be alone instead of attending social events.

During this stage of the progression, the caregiver has a more involved role. It’s a good time to establish a daily care plan that accounts for the person’s physical and emotional needs. It’s also a time when caregivers can begin feeling the pressure from their responsibility. If you are your loved one’s caregiver, make sure you allow time for yourself. It isn’t unusual for caregivers to become overwhelmed to the degree that they suffer both emotionally and physically.

Some signs and symptoms to watch for during stage 4 include:

During stage 5, the person needs assistance performing normal day-to-day activities like preparing meals and getting dressed. Their signs and symptoms from stage 4 become pronounced, making them easily identifiable. They have minimal short-term memory and experience confusion and forgetfulness frequently throughout their day.

Stage 6 of dementia might be the most heartbreaking for friends and family members. The person might forget their names and the details of recent events. Their ability to communicate is severely impacted, accompanied by anxiety, agitation, compulsive behavior, and delusions.

Some signs and symptoms to expect during stage 6 include:

The final stage of dementia is marked by a very severe cognitive decline that eventually ends in death. During this stage, the person often can’t speak or communicate. They require assistance with everything they do including walking and eating. At this point in the progression of the disease, the caregiver focuses on providing the person with the best possible quality of life and making them comfortable. The person requires round-the-clock care that is virtually impossible for a single caregiver to provide.

Signs and symptoms to expect during stage 7 include:

The average person lives between 4 and 10 years after a diagnosis of dementia, depending on the type of dementia and the individual. Some people live only 1 or 2 years while others live as long as 20 years. 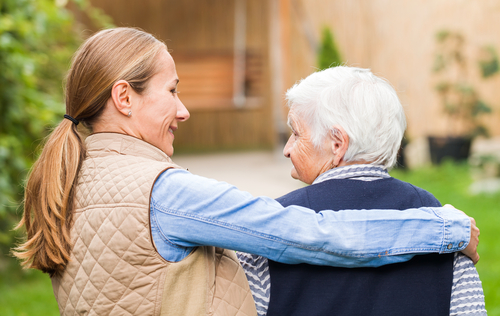 Becoming a Caregiver for a Loved One with Dementia

During the first few of the 7 stages of dementia, acting as a loved one’s caregiver is more a matter of having some time away from other responsibilities. You might stop by their home on your way from work to help with meal preparation or to do their laundry.

As their condition progresses, they require more care. For any elderly person living alone in their home, safety is always an issue. Dementia patients have a much higher risk of getting hurt because they leave the stove on, fall, or wonder off and get lost.

Thousands of adult children struggle with the decision to take their parents with dementia out of their homes. Many adult children can’t understand why their parents insist on staying at home even when they aren’t able to perform basic daily activities without assistance. Whether an aging person is capable of making their own decisions about where to live or not, quality of life should always factor into the decision. For dementia patients, it means getting the right level of care for each stage of the disease and making the most of the life that they have left.

Sometimes seniors require assisted care even when they don’t have dementia. They might need help performing daily activities due to normal signs of aging. Seniors often have more difficulty running errands, performing household tasks like washing dishes or doing laundry, or going up and down stairs. Sometimes they hire a caregiver to come into their home several hours each week to help with these tasks.

One major difference in providing care to a dementia patient is often overlooked. While a senior without dementia might welcome help with their daily activities, those with dementia often resist care. They might refuse to eat or bath, resulting in problems for the patient and the caregiver.

Like other dementia-related symptoms, resistive behaviors vary from one person to the next. It also depends on which of the 7 stages of dementia they are in. Sometimes the regular signs and symptoms overlap with resistive behaviors. For example, the irritability and anxiety that are common during stage 4 might be present in their refusal to accept care.

As your loved one’s dementia progresses, their needs and your responsibilities as a caregiver will also grow. That means putting more time and energy into your role, but it also means a greater emotional demand. You should plan in advance for what becoming a caregiver might mean to you. Although many people find it rewarding, it often has a negative impact on the caregiver’s finances, relationships, and their emotional and physical health.

Planning ahead is one of the most important things you can do for your loved one. It allows them to make important decisions for themselves. Most people don’t want to be a burden to their loved ones. They do have choices other than staying in their current home or going into a nursing home. The right kind of senior living offers a level of medical and assisted care that will meet the growing needs of the resident. Giving your loved one access to professional dementia care according to their growing needs is the best thing for you and for them.

Park Terrace is different from other senior living facilities. We offer an idyllic senior living experience in a lush, resort-style setting that makes every day feel like a vacation. We offer both independent living and assisted living to accommodate a wide range of needs. Our trained nurses and caregivers are available around the clock to provide care, support, and personal assistance. There are many opportunities for social interaction and exercise. Contact us to schedule a tour and learn more about luxury living with assisted care when you need it.